Sloths and anteaters are victimized by urban sprawl in Paramaribo. As the city grows, their forest habitat is lost. Thus, three- and two-fingered sloths, anteaters (silky, lesser or giant) end up in people’s gardens and houses and come in conflict with dogs. People often are scared, or are afraid their small children can be hurt by these now homeless animals. In addition, the changing climate is clearly making an additional impact on the animals surviving in the small forest fragments.

Every now and then we also rescue Brazilian porcupines.

In case you have an anteater, sloth or armadillo in need you can reach us at 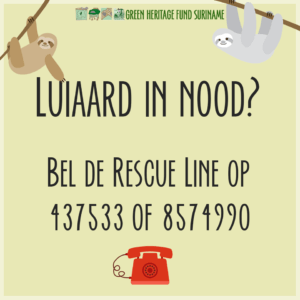 Your generous donations help us rescue, rehab, relocate and release these animals

Together We Can Help the Sloths