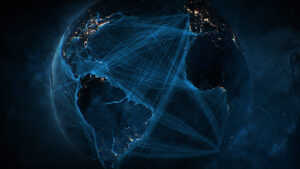 Sound in the ocean. Photo: © SpaceQuest and Google Oceans

Paramaribo – Wednesday 8 June is World Ocean Day, a fact that Green Heritage Fund Suriname also wants to celebrate this year with the recently released film Sonic Sea. The film screening will take place on 8 June two days before the birthday of Jacques-Yves Cousteau, the famous French marine biologist and cinematographer. The GHFS carries out this activity with financing of WWF Guianas and tour operator Waterproof Suriname who are both committed to the theme of ocean awareness.

Life in the sea exists in a world dominated by natural sounds. Whether you’re a shrimp or a whale, you use sound to find prey and communicate, sometimes over distances of hundreds of kilometers or more. But over the past hundred years we, humans, have been causing an increasingly louder cacaphony of unnatural noise in the sea, coming from shipping, exploration for oil and gas supplies, naval sonar exercises, construction work and other human activities. This causes a variety of effects in whales, dolphins and other marine life, including stress, deafness, avoidance behavior, which makes them less able to feed and ultimately leads to death. Sylvia Earle, the well-known marine biologist, calls this constant deterioration of life in the sea “…like the death of a thousand cuts”. Fortunately, in many cases, there are relatively simple solutions to deal with these problems if the political will is present.

It is therefore memorable that yesterday, 1 June, the National Oceanic and Atmospheric Administration (NOAA) of the USA announced a new strategy aimed at tackling noise in the ocean as the pollution it really is. This strategy is an important step in the right direction for the USA, which will undoubtedly be the trend for other countries to tackle this kind of persistent pollution.

The ocean, the biodiversity it hosts, and its health is crucial to humans, as 1 billion people depend on the proteins provided by healthy ocean ecosystems. The ocean produces 50% of oxygen in our atmosphere and is crucial to regulating the climate on earth. GHFS, together with partners such as WWF Guianas and Waterproof Suriname, continues to work toward good management of our maritime area including the establishment of a corridor for marine marine mammals in the Northern Atlantic Ocean, as well as clear regulation of fisheries in Suriname to ensure food security for the Surinamese population. Like every year, the message, although it is becoming increasingly urgent, is this year that salvation for the oceans is still possible if measures are taken now to promote integrated management of marine and coastal areas. This would include establishing marine protected areas as well as coastal protected areas and the control of pollution from the land. Mangrove ecosystems should be protected as they are important as breeding grounds and to protect the coast and its human habitation.

The Green Heritage Fund Suriname invites everyone to learn more about life in the ocean with the film: SONIC SEA