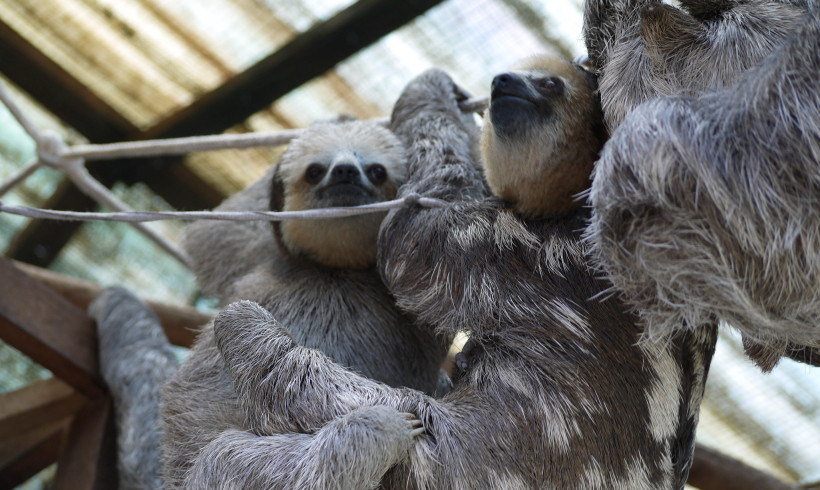 In observance of World Wildlife Day on Sunday, the 3rdof March, we wanted to share with you some of our thoughts on wildlife in urban areas. After the 2012 rescue, we were left startled at the sheer number of animals rescued, and exhausted from the work involved in rescuing, rehabilitating, caring and releasing 133 animals. Already during the rescue, we had discussions about this fragment and others that were not yet deforested. Together with Ari Vreedzaam and Chantal Landburg we were brainstorming ideas as we all were convinced of the importance of these forest fragments for urban biodiversity and conservation.

As a follow-up, GHFS started working with students to do more research on the forest fragments, focusing on particular on two privately owned fragments of 18 and 30 hectare. One student conducted a transect study, put up camera-traps and interviewed the adjacent human population with regard to the biodiversity seen in the forest fragment, that was not far from the 2012 deforested plot. A second study was abandoned after the preliminary stage, as the student in the end lacked time to do the transects. However, the exploration of the 18 ha forest fragments was promising. A third study was focused on one specific xenarthra species, the giant anteater.

However, the puzzle of the increasing green space was solved a little bit when we were called in 2016 by a couple who were deforesting a plot of land. They wanted to ensure that any animals on the land would be saved. Together with a game warden I went out to the land where we met the owners. As we drove up, we immediately concluded that in the secondary growth present, no sloths would be found. Only at the very back, where there appeared to be still some original forest remaining, we thought animals would find the right kind of habitat. The story they told us, however, shed some light on the increase in forest fragments on our maps. In 1975, prior to the independence of Suriname many farmers left for Holland, and abandoned their agricultural plots. These plots then became overgrown again, and started appearing on our maps as forest fragments. This confirmed that a ground-truthing of these forest fragments would be crucial to find out where to focus our work.

At the end of 2016, we finally submitted our paper “Sloths in the City”, and were just in time for the publication in Edentata 17. At the end of our paper we proposed five theories. First, that it was possible that historical clear-cutting of the surrounding region may have provided opportunities for the establishment of early successional plant species like Cecropiaand sweet potato vines (Ipomoeaspp.). Second, that the lack of predators in this “urban” location,e.g., harpy eagles, arboreal cats, large snakes, etc. might allow for a substantial increase in population size. Third, that the density may be linked to rates of encounters and matings between males and females. Thus, higher density may foster population growth, especially in the absence of limiting resources or predators. Fourth, that the high density may have resulted from contraction and migration of animals from surrounding areas—an artifact of urbanization collapsing a more dispersed and less dense sloth population inward to the only remaining forested refuge. The fifth option, could be that all of these factors could operate together. Thus, sloth densities in the wild may be much higher than previously recorded, and urbanization processes may have the potential to artificially increase them further. The conclusion, was indeed that further research would be needed.

Although our paper was published in 2016, in 2015 we already had formulated a proposal together with George Middendorf and with input also of Nadia de Moraes-Barros, that was directed at securing the habitat of sloths in the urban space. The work was directed towards four different aims and objectives.

1. promote the continued existence of viable coastal sloth populations in the wild in Greater Paramaribo;

2. prevent the decline of coastal sloth habitats, among others, by providing for the rehabilitation of cleared or otherwise disturbed sloth habitats in Greater Paramaribo;

3. promote future land use and development that is compatible with the survival of coastal sloth populations in Greater Paramaribo; and

How to achieve these aims and objectives?

Our work will focus on five areas. First, we need to cover the scientific basics, by conducting research and conservation. This will include a conservation genetic analysis, geographical analysis, ecological analysis of forest fragments, a biological analysis, and of course rehabilitation and shelter. The second area is legislation and policy-makers, where we will analyse the legal framework and work on improving the stakeholders network. Thirdly, we need communications, for strengthening of lines of communication and the diffusion of information, we need communication strategies to allow the general public to get closer to sloths, and we need communication as a tool to diminish threats. The fourth area will focus on education and community participation, which will include education and community participation. And the fifth area will focus on administration and institutional strengthening, bringing together decisionmakers and local stakeholders. This is all closely related to what normally happens around species action planning.

Two species of sloths are found in Suriname, the pale-throated three-toed sloth (Bradypus tridactylus) and Linnaeus’s two-toed sloth (Choloepus didactylus). According to the IUCN both are of “least concern”, indicating that neither species is considered endangered or threatened. There are concerns, however, as both species occupy Suriname’s coastal zone which itself is threatened by habitat loss, poaching, pet and bushmeat trade, and selfie tourism. In addition, the entire coastal region, because it is extremely low-lying, is threatened by sea-level rise associated with climate change.

Despite the fact that killing or capturing of sloths for any purpose is against national laws, sloth populations are under increasing pressure as urban and rural human populations expand within the coastal region and engage in the unsustainable exploitation of natural resources. The activities seriously threaten regional wildlife, including and perhaps especially sloths. Each urban and semi-urban forest and forest fragment cleared for development and agriculture reduces suitable habitat for sloths. Each road and development exposes these slow-moving animals to the potential for becoming roadkill. Changes in the vegetation through cutting, development, construction and alteration increases the likelihood of landscape change and alterations of floral diversity. These, in turn, affect the vegetation needed to sustain these unique species.

To address these issues, the sloth action plan for Suriname would

The resulting monitoring plan/action plan would guide GHFS collaboration with the Nature Conservation Division and other organizations—and as such, could serve as a model for other species action plans, e.g. anteaters.